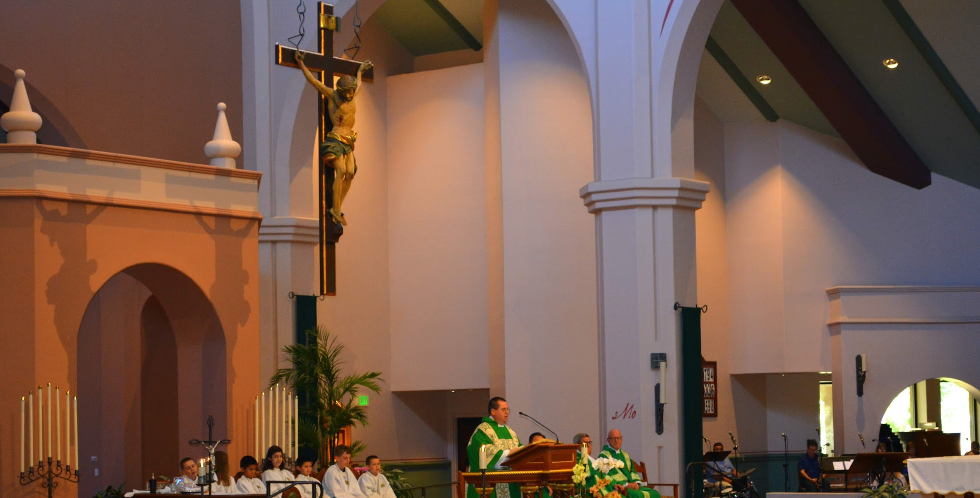 (Our parish went with the Cycle A readings despite this year being Cycle C for the Candidates and Elect in RCIA. These readings center around the raising of Lazarus, not the woman caught in adultery.)

With such a long Gospel passage, I’m going to get right to the point.  I see a strong metaphorical connection between the end of today’s Gospel passage and confession.  When Christ tells the Apostles “Untie him and let him go!”, this is Christ commanding the Church to forgive sins.

You see, when the bible talks about death, it is a mistake to think solely in physical terms.  Throughout the Bible there is a strong connection between sin and death.  What’s the penalty for Adam and Eve’s first sin?  Death!  What was Christ’s victory in the resurrection?  It was a victory over sin and death.  So when we think of Lazarus lying in the tomb, in addition to a physical death, we should see him as someone who is buried underneath his sins.

And so when Christ says “Lazarus, come out!” he’s not just raising him from physical death.  He’s also calling Lazarus away from sin.  He’s telling Lazarus that it is time to leave his old life of sin buried in the tomb and rise to a new life.

But Christ knows it is not enough to call Lazarus away from sin.  He has one more command.  But this one is not for Lazarus.  Instead it is for those who witnessed the miracle, the Apostles.  “Untie him and let him go!”  He is telling the Apostles and thus the Church that we need to forgive those who have sinned.  In other words, he’s telling the Church the importance of the confessional.

Because the reality is that sin crushes our spirit and buries our souls.  My worst habitual sin is Gluttony.  I gained a lot of weight this year.  And there’s no excuse for it.  It was foolish and sinful.  I feel very ashamed.  I feel crushed.  I feel that sin has buried me inside this body that has gotten way too big.

Each of us has a different sin that buries us.  Everyone here has some sin they struggle with, something that they feel buried under.  And so, we are just like Lazarus.   We have been buried for a long time, so much so that there is a stench coming from us and our tomb.  And what does Christ say when confronted with that stench?  He says to us “Come out!”  Go to confession and leave that sin behind.

So let’s all make sure we go to confession before Lent is over.  You have 3 more opportunities at this parish:  You can go this Tuesday at 4 PM.  You can go next Saturday at 9 AM.  And finally, there is the communal penance service that includes individual confession, on the 16th, a week from Tuesday, at 6:30 PM.  And if those don’t work for you there are countless other opportunities at the surrounding parishes, including their own reconciliation services.

This site uses Akismet to reduce spam. Learn how your comment data is processed.